Cornelius Clifford
Member of the Ancient Order of the Silver Scroll, Researcher into the Hidden Realms, specialising in Dragons, Magic, The Fae and the history of the Hidden Realms. Visiting lecturer at the University of Imradd and contributor to the Enyclopaedia Imradd, published by Dreamworlds.

Delighted to announce the publication of our latest book: Underground Fantasy Houses, a unique eBook packed full of design ideas, plans and sketches for building a fantasy underground house. Some folks would call these 'hobbit houses' after the charming description in Professor Tolkien's lovely books. 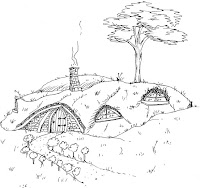 In this unusual digital book, Cornelius Clifford explores how a fantasy house beneath the ground might be constructed. He refers back to traditional earth-house building techniques used for living underground long ago and attempts to answer questions like:

What form might an underground dwelling take?
How to make a round 'hobbit' style window or door.
Are round window frames feasible?
How to dig out a burrow type house, or create a cut and fill home.
Building a mound house based on ancient tumuli and long barrows...
Building a robust roof structure to support an earth and turf roof
Window tunnels to let in light and air.

And much, much more, packed full of ideas and inspiration, this original fantasy book will tickle your imagination, and might even inspire you to create your own underground house!

You can buy this fantasy book direct from:  CORNELIUSCLIFFORD.com
or download your copy today from: DRIVETHRU RPG.com 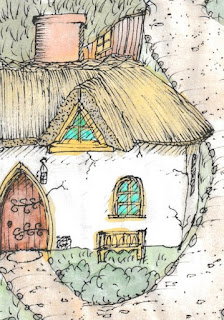 Posted by Cornelius Clifford at 01:26 No comments:

Finally made a new video featuring Hortencia, a Skeksis inspired witch. In this little comedy film she teaches us how to make Cockroach Stew! Have a peek here:

Posted by Cornelius Clifford at 05:19 No comments:

Posted by Cornelius Clifford at 10:21 No comments:

Cornelius has finished his latest book which is called; Forest Folk of the wild Wood. In this guide book to the wild people of the deep woods, he describes and illustrates many tribes and races in detail. From elves to goblins to faeries; giants, trolls, dwarves and fae folk. You can find out more or buy the book by clicking here and following the link;

Forest Folk of the Wild Wood

Published by Dreamworlds, this book of imaginative children's fiction is for children and adults aged 9-12.

Apologies for taking so long to write again. After my escape from the slave traders, I spent some weeks begging on the streets of Sak-Luaan, before I found humble employment in a tannery curing hides and animal skins. It was filthy, smelly work but eventually I saved up enough silver to pay for a passage out of that pit of iniquity. I found a 'berth' on an Anguinian trader sailing to Gorglis. This berth was not a cabin, or even a bunk, just deck space for my poor old bones.
We made good time to Gorglis and there were no more unpleasant maritime adventures, thank the Good Witch!. I am now ensconsed in the Guild of Clerks and Scroll Makers' guest lodgings. The masters of the Guildhouse took pity on me and accepted my word concerning my credentials. I await the transfer of funds from Imradd before I can move to more commodious accomodation and begin to think of recommencing my journey North.
It is good to be alive!

Sold as a slave in that cess-pit of rogues and harlots, Sak-Luaan

A Dragon sighted off the coast

My Dear fellow Faerie scholars
Today we sighted an enormous Dragon; a blue scaled Great Wyrm from north of the Great Rift Valley, I firmly believe. I could barely contain my excitement as it flew by our rolling barrell of a galleon. Most of the other passengers, merchants and traders, rushed to take cover below decks, thinking, erroneously, that the dragon might attack at any moment.
It was quite clear to me, however (with my knowledge of dragons and dragon lore) that the creature was simply heading south ~ mayhaps it was a female who, having hatched her brood over the winter, was simply heading south for the sun.
She was a truly magnificent beast, blue scales sparkling in the sunlight and her large wings flapping slowly ~ her very mode of flight indicated that she was no threat. If the dragon had been diving towards us out of the sun or sneeked up astern to rip off the ships masts (something she was evidently large enough to be capable of doing with ease) then I would have been concerned. In fact she showed little interest in us tiny mortals, scurrying about on the deck of our cog. All too quickly she was gone. The crew relaxed somewhat and the captain, a shifty fellow at the best of times, gave me a peculiar look. Clearly he was impressed or maybe perplexed, at my lack of trepidation.
Later, when the Captain announced we were stopping off at Sak-Luaan, my heart really sank. A reknowned cess-pit of rogues and pirates, to me the town of Sak-Luaan was a far more dangerous and unpredictable danger than the Blue Scaled Dragon flying calmly by!
All good wind to your sails, me hearties!
Cornelius
Posted by Cornelius Clifford at 11:57 No comments: